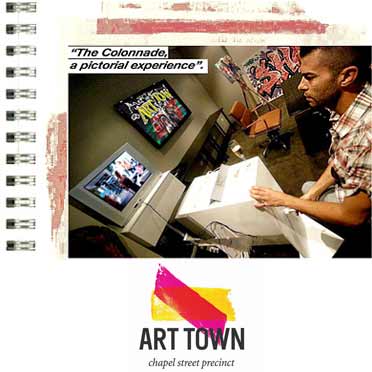 Tastes of Chapel winds down. The food, fashion and fun continues until the Tastes of Chapel festival draws to a close on Friday, March 19. Many took time to be part of the precinct event. The results of the Art Town outdoor sessions from Windsor to South Yarra were announced at the exhibition opening on Wednesday night at The Olsen Hotel. Young Berwick visual artist Brett Ashby won first prize, a 1500 dollar grant from Streets Ahead, for his motion artwork.

The interactive piece overlaid stop frame animation of Chapel St with rotating stills of logos and branding. Lauded for its clever attention to detail and conception, the entry was novel among Art Town s paintings and photography. Ashby said he worked 15 to 16 hour days on the work that allows the viewer to control the media. Ashburton architect and illustrator Peter Edgeley won second prize, a 1200 dollar Olsen art stay package. Edgeley s contemporary oil streetscape would be the first in a series, he said. Photo realist Jackie Stewart, third, from The Stables art group in Malvern East, won 200 dollars worth of Eckersley s supplies. Her print set included the Windsor Shoe Repair and vignettes of shopfronts. Art Town project manager Margaret Kernich was very happy with the level of interest in the inaugural competition, accepting about 60 entries.